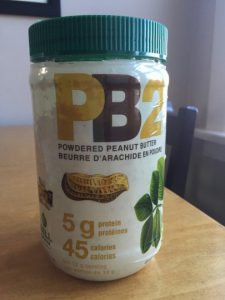 My husband and I are BIG fans of peanut butter. Peanut butter sandwiches with raspberry jam is a comfort food for the two of us. We generally have a large jar of all natural peanut butter on our kitchen counter, and a jar of almond butter as well. (I even prefer peanut butter to chocolate – shhh, don’t tell Andrea, she’s the Chocoholic Dietitian!) Strangely, only one of our children will consume peanut butter. The other two are totally anti-peanut butter.

The biggest downside to peanut butter, particularly the natural brands, is how… messy they can get. Have you ever tried adding natural peanut butter to a smoothie, or pancakes, and had it be a lumpy mess? We have.

PB2 to the rescue.

What is PB2? It’s a powdered peanut butter. The oils have been removed, reducing the peanut butter to a powder. This makes it super easy to mix into other things. I have used PB2 in smoothies and pancakes. We might stir it into yogurt for a dip, oatmeal at breakfast time, or add it to a batch of cookies for extra flavour, but not changing the texture. It also works as a substitute for flour, to make an item lower in carbs, which I will do for some baked goods. In our family, we like how easy it makes adding peanut butter, without clumping up the blender, or mixing bowl. It’s definitely not the same as spreading a slice of warm bread with natural, sugar free peanut butter, but it sure helps make a tasty dish with less clean up! 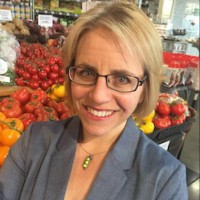 Kristin is an administrative assistant in Calgary, Alberta.