Can I Drink Coffee While Pregnant?

Is it safe to drink coffee during pregnancy? 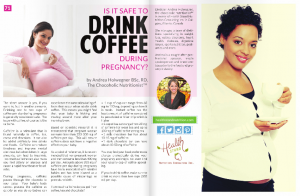 The short answer is yes, if you want to, but in smaller amounts.  Drinking one to two cups of coffee per day during pregnancy is generally considered safe.

The issue with coffee, of course, is the caffeine.

Caffeine is a stimulant that is found naturally in coffee, tea, cocoa and chocolate. It can also be added artificially into drinks and foods. Caffeine can reduce tiredness and improve mental alertness but when taken in large amounts, can lead to insomnia. Too much caffeine can also make you feel jittery or anxious and cause a rapid heartbeat or headache.

During pregnancy, caffeine passes through the placenta to your baby. Your baby’s body cannot process the caffeine as quickly as you do so babies can experience the same stimulating effects that occur when adults drink coffee. This means you might find that your baby is kicking and moving around more after your morning brew.

Based on scientific research it is recommended that pregnant woman consume less than 200-300 mg of caffeine per day. This will ensure caffeine does not have a negative effect on your baby. As a point of reference, it is recommended that non-pregnant woman and men consume less than 400 mg per day. Amounts above 300 mg of caffeine per day during pregnancy have been associated with smaller babies and has been blamed as a possible cause of miscarriage or premature birth.

How much caffeine do you get from coffee, tea and chocolate?

You may find that your food preferences change dramatically during your pregnancy and might not even find your usual cup of coffee appealing.   If you do drink coffee, make sure to drink no more than two cups (500 ml) per day.

a version of this article appeared in Best in Baby Biz