Here is how one company made a BIG difference in workplace culture, energy and health.

Employees often skip lunch, pack an uninspiring lunch and eat it at their desk or stand in long lineups to buy something that may not be good for their health and to keep them performing their best at work.

I loved the story of what Thumbtack, a San Francisco company did to solve this dilemma with great return on investment.  Here is the article published in Fast Company by Drake Baer on April 30, 2013 that is a must read for companies looking to improve health, productivity and workplace culture (which ultimately improves profits!):

If you think you’re productive during lunch, think again

Got a case of the brown-bag blues?  Time to rework your approach to lunch — which can be the most useful time in your day, if you do it like San Francisco Startup Thumbtack.

About three years ago, Thumbtack was a startup in a house high atop a San Francisco hill. There, the local-services-discovery company’s original six employees lived, worked, and schlepped to lunch.

With every noontide, the decidedly pre-revenue startup lost an hour to the lunch trek. Soon they had a crazy idea: What if they ordered in? They tried one day a week, and like the research suggests, they worked way better after eating well. Then a crazier idea: What if they hired a chef? 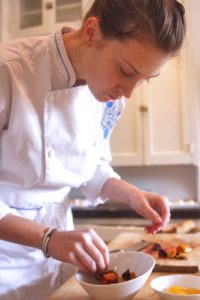 They did: Thea Baumann, culinary school-trained preparer of ultra-fresh deliciousness.

But what if you’re not an ultra-progressive Silicon Valley startup?

Two-thirds of Americans eat lunch at their desks. The Atlantic wrote a definitive guide to the practice. And though it exposes you to more germs than a toilet seat, the desk lunch often feels like the best option–how else are we going to get to our families, friends, and happy hours faster? How could actually taking lunch actually be more productive?

For the extremely productive Bob Pozen, what you do about lunch isn’t about the meal itself, but the function that it serves.

“If you start with the notion that having a quick sandwich at your lunch is productive in the sense that it takes less time, that’s true,” the author says. “But we don’t want a hard and fast rule–we want a functional rule.”

The desk-lunch efficiency might not be worth it, he says, if you could gain more from stepping away.

You could eat alone–perhaps away from a screen. Pozen says that since you’ll sometimes have a very full day, eating alone can help you restore your personal resources. And don’t pull out your phone: An absence of stimulation encourages associative or integrative thought, spurring your creativity. As well, if you have an idea that you’re working on in your head, eating alone allows you to continue uninterrupted.

Another option is to address the afternoon energy crash: You could take a walk or hit the gym, or, alternatively, you could take a 20-minute nap. What works is individual, Pozen says, so it might be a good idea to experiment with a few different approaches. 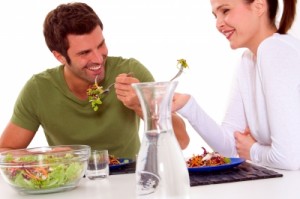 But eating is also social. Companion, after all, is Latin for person-you-eat-bread-with. Etsy Design Lead Cap Watkins recently wrote about how his career took off after a fortuitous coffee. The lesson: Eating forms connections, connections beget opportunities. And it’ll make you a better negotiator.

But beyond and before the job hustle, sharing meals bolsters trust within a team. Pozen says that if you’re a manager, you can use meals as a way to check in with your reports. It’s like having a meeting, but instead of wasting time, you eat.

Lunch is a city

When Arram Sabeti, the CEO of Pandora-for-food startup ZeroCater, wants to explain the value of eating together, he brings up a legend of unplanned collaboration.

Back when Steve Jobs was planning the Pixar campus, he made sure to put the bathrooms in one central place, so that people from different disciplines would run into each other, which would mean that their ideas would too. It’s the same sense of cross-pollination we find urban centers: As cities become more dense, they become more productive. Sabeti’s pitch, then, is that taking lunch together can make your company more of a neighborhood.

“All of your coworkers are coming together every day and actually having a conversation,” Sabeti says. “It’s just kind of shocking that so many companies let this option slip by.”

The Takeaway: Have your lunch around an office table every once in a while–or you’ll be leaving money on it.

Download a printer-friendly PDF of “If You Think You’re Productive During Lunch, Think Again”