Clubs, subs and paninis – whatever the type, Canadians have an affinity for sandwiches; a national survey by Udi’s Healthy Foods has discovered that Canadians eat approximately 3.6 billion sandwiches each year.

Sandwich origins date back to the 18th century when the ‘Earl of Sandwich’, an English aristocrat named John Montague, invented the sandwich by ordering meat served between two pieces of bread to keep his hands from getting greasy during uninterrupted card play. Flash forward – sandwiches are now the most packed item in the 21st century lunchbox.

Sandwiches are the ultimate convenience food and can be filled with wholesome ingredients to sustain you throughout the day.  The versatility of sandwiches means they can fit a range of diets, and even those adults or kids who are following a gluten-free diet now have lots of choices in breads.

The vast majority of Canadians (79 per cent) say bread is important in their family’s diet. Thanks to a growing selection of gluten-free bread options, the more than four million gluten-free Canadians (12 per cent) can take part in International Sandwich Day on November 3 without compromising their health.

Just how often do Canadians tuck into a sandwich? Here’s the break-down of Canadian sandwich-eating frequency:

Here’s how the sandwich ‘stacks up’ against other popular lunch items of Alberta respondents:

TOP 5 ITEMS IN BC KIDS’ LUNCHES

Here are two quick and delicious sandwiches the whole family can enjoy:

This savoury sandwich is sure to be an ooey, gooey family favourite.  Loaded with melty cheese, this tasty lunch classic can be whipped up in no time and served steaming hot at the table or cold in a lunch box. 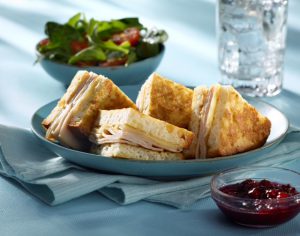 Makes 2 servings.  Note from the Kitchen: You can substitute any kind of meat or cheese you like. Try ham, leftover roasted chicken, or make a BLT! To pack in lunches, allow the sandwiches to cool completely before placing in an airtight container.

Click here for a printer-friendly PDF of this recipe 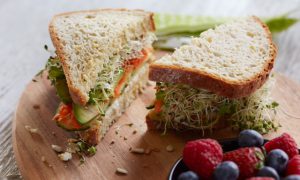 To make one sandwich, spread half the hummus on a bread slice. Sprinkle half the sunflower seeds and Feta over and mound half the sprouts and remaining veggies on top. Finish with a slice of bread, cut in half and serve. Repeat with remaining ingredients for second sandwich.

Click here for a printer-friendly PDF of this recipe

From July 19th to July 22nd 2013 an online survey was conducted among 2,530 randomly selected Canadian adults who are Angus Reid Forum panelists. The margin of error—which measures sampling variability—is +/- 1.95%, 19 times out of 20. The results have been statistically weighted according to education, age, gender and region (and in Quebec language) Census data to ensure a sample representative of the entire adult population of Canada. Discrepancies in or between totals are due to rounding.