There have been plenty of negative discussions about sugar in the media, documentary films as well as consultations by groups such as the World Health Organization and Health Canada’s recent proposed food label changes. Here are some things you need to know:

What are the concerns with eating too much sugar? 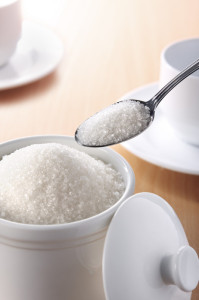 Similar to consuming too much of anything, too much sugar can increase the total calories of your diet and increase the risk of obesity. Excess sugar consumption is also a large concern for tooth decay in adults and children. Taking in too much sugar can also take the place for other nutrient dense foods that are rich in nutrients such as vitamins, minerals and fibre that we need for good health. There is also growing research to suggest that high sugar consumption can increase triglycerides (a blood fat similar to cholesterol that can increase the risk of heart disease).

What are the guidelines saying about sugar?

Currently there are varying opinions about how much added sugar is too much. The Dietary Reference Intakes (DRI’s) by the Institute of Medicine and endorsed by Health Canada suggest no more than 25% of total energy should come from added sugars.

What is the difference between added sugar and total sugar?

Sugar is a type of carbohydrate. To our body regardless if we consume honey, brown sugar, white sugar, agave, maple syrup, fruit or vegetables, these are all simple sugars made up of single and double units of sugar. The difference between them all is nutritional density or the amount of vitamins, minerals and fibre they contain.

The above recommendations are both based on added sugar, which is based on glucose, fructose, sucrose (table sugar) as well as sugars naturally present in honey, syrups, fruit juices and fruit concentrates. Added sugar is found in foods such as pop, cake, cookies, chocolate bars, frozen desserts, granola bars and more.

Total sugar is currently listed on a food label and includes a combination of added sugar as well as those that are naturally occurring in foods such as fruit, vegetables and dairy foods. It can be confusing on a label to see foods such as a carton of milk or package of baby carrots displaying grams of total sugar. These foods obviously do not have sugar added to them but contain natural carbohydrates (milk contains lactose and carrots contain fructose and glucose).

What is the bottom line when it comes to sugar?

No one food or nutrient contributes to obesity, disease and health issues. There are no bad foods, just bad overall diets. Similar to the trends we have seen in the past for low-fat diets and low-carb diets, remember to keep things in perspective. Sugar is not a villain and you don’t need to have a sugar-free diet.   If you have been consuming an excessive amount of pop, sugary beverages, candy, desserts and other sugary foods of course you could benefit from reducing these. You don’t need to eliminate them, but be clear on what you really love and save room for these favorites.

You won’t find me eating candy and pop since they are not my favorites but I do love chocolate and homemade baked goods such as muffins and cookies that contain regular white sugar. I also enjoy maple syrup on pancakes and a sprinkle of brown sugar on oatmeal.

What about the safety of alternative sweeteners?

A Sept 2014 widely publicized article published in Nature* showed artificial sweeteners caused glucose intolerance (a rise in blood sugars) a condition that can lead to diabetes and obesity. This study suggested consuming saccharin (such as pink packets of Sweet N’Low pink packets), Sucralose (such as yellow packets of Splenda) and Aspartame (such as blue packets of Equal) appears to favor growth of gut bacteria that breaks down sugary products in a more efficient way.

This one very small preliminary study (mostly on rats and with very few humans) shouldn’t be taken as a firm recommendation but as something that certainly needs to be investigated. Non-caloric artificial sweeteners are among the most widely used food additives worldwide. At this time Health Canada has approved alternative sweeteners as safe when consumed within the Acceptable Dietary Intake (ADI). For a good consumer friendly overview highlighting the ADI’s visit here.

At the end of the day, the thing to remember is neither a diet based on a high level of sugar or a high level of alternative sweeteners is ideal. I have noticed that clients of ours may find it hard to acquire a taste for more whole natural foods we want them to eat more of when they are constantly sipping artificially sweetened flavored waters and diet pop.

My personal vote? As a foodie I consider alternative sweeteners fake foods that simply don’t taste good and instead prefer to have a bit of the real thing (ie/ sugar).

Click here for a printer-friendly PDF of this article